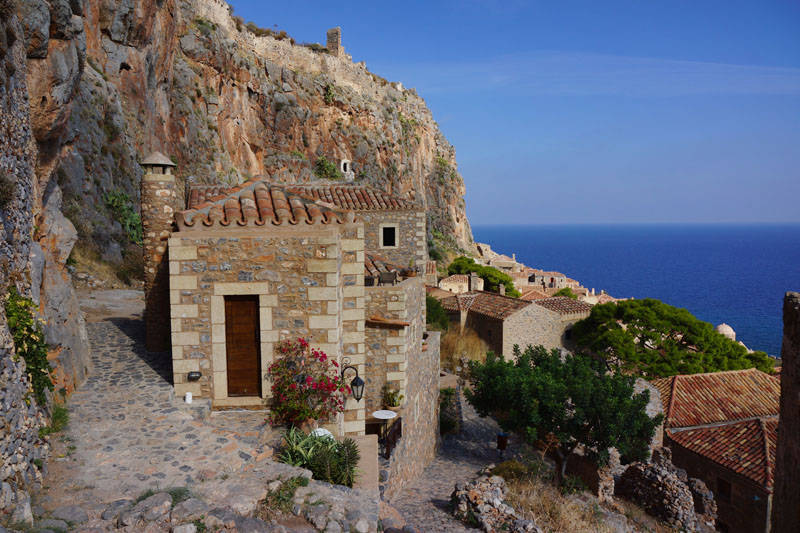 Monemvasiá, founded by the Byzantines in the sixth century, is a breathtaking medieval tower town located on the south-eastern coast of the Peloponnese.

Take the opportunity to explore this mystical stone-built settlement, nestled at the edge of a big rock by the sea, and immerse yourself in a unique medieval atmosphere!

Upon entering the castle, your journey through time begins.

Peer into the history of the fortress –the so-called “Gibraltar of the East”–, which was occupied by the Byzantines, the Crusaders, the Venetians, and the Turks in the past.

Wander around its narrow cobbled streets, and admire the beautifully restored stone buildings. Taste culinary delights at a fine restaurant on the roof of a tower house, and spend a romantic night at a stone-built tower. The “Kástro” (castle) is divided into two parts, the lower and upper town.

In the lower part of the town, explore the ruins of the historic buildings situated there – among which the Muslim Mosque, a preserved 16th century building housing the Archaeological Museum–, as well as the magnificent Byzantine churches.

In the (uninhabited) upper part of the town, you will come across the remains of old Byzantine buildings. A rocky twisty path leads you to the Fortress of Youlás offering an outstanding view of the city!